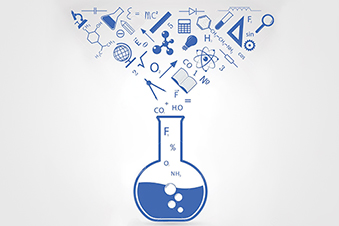 Jülich, 27 February 2014 – Aerosols in the atmosphere influence cloud formation, the Earth’s radiation balance, and thus the climate. Until now, it had been unclear exactly how these aerosol particles are formed from the volatile organic substances emitted naturally into the air by trees and other plants. An international team of scientists, led by Forschungszentrum Jülich in Germany, have solved this mystery using innovative analysis techniques. As they report in today’s issue of specialist journal Nature, they discovered and characterized extremely low-volatile vapours that cause the aerosols to grow to sizes of 50 to 100 nanometres which are then capable of affecting the climate.

According to their results, these extremely low-volatile organic compounds consist of relatively large molecules which contain an almost equal number of carbon, oxygen, and hydrogen atoms. The scientists present a plausible explanation supported by numerous experimental findings of how these vapours are formed almost immediately when plant emissions (e.g. monoterpenes) are released into the air. The vapours can then condense on small aerosol particles (starting from clusters of only a few nanometres in diameter) suspended in the air, causing them to grow to around 100 nanometres – at which size they can reflect incoming sunlight and act as condensation nuclei for cloud formation in the atmosphere.

The researchers’ findings have bridged a major gap in knowledge in atmospheric and climate research. “Thanks to our much improved understanding of the role that naturally occurring substances in the atmosphere play in the formation of organic aerosol particles, we will in future be able to make more reliable assessments of their impact on cloud formation and sunlight scattering, and thus on climate,” says Dr. Thomas F. Mentel from Jülich’s Institute of Energy and Climate Research – Troposphere (IEK-8).

The findings are based essentially on measurements performed at Forschungszentrum Jülich in a special 1450 litre glass chamber using a combination of several recently developed mass spectrometry methods, with instruments from Jülich, the University of Helsinki (Finland), and the University of Washington (Seattle, USA). Combined, these produced one of the most comprehensive data sets ever acquired, showing how organic emissions from trees can oxidize to form organic aerosols.

Experts consider a good understanding of the relationship between the increase in soil temperature, plant emissions, aerosol formation, and cloud formation to be essential for predicting future climate development correctly. “Our current research findings will help to improve computer models of the atmosphere and reduce existing uncertainties in climate prediction,” says Prof. Andreas Wahner, director at IEK-8.

“What really made these new findings possible were the new mass spectrometry methods, together with the combined efforts and expertise of all the international collaborators involved”, says the article’s lead author Dr. Mikael Ehn, currently university lecturer at the University of Helsinki. In addition to the institutions at Jülich, Helsinki, and Seattle, the Leibniz Institute for Tropospheric Research (Leipzig, Germany), the University of Copenhagen (Denmark), Aerodyne Research Inc. (USA), and Tampere University of Technology (Finland) contributed to the study.